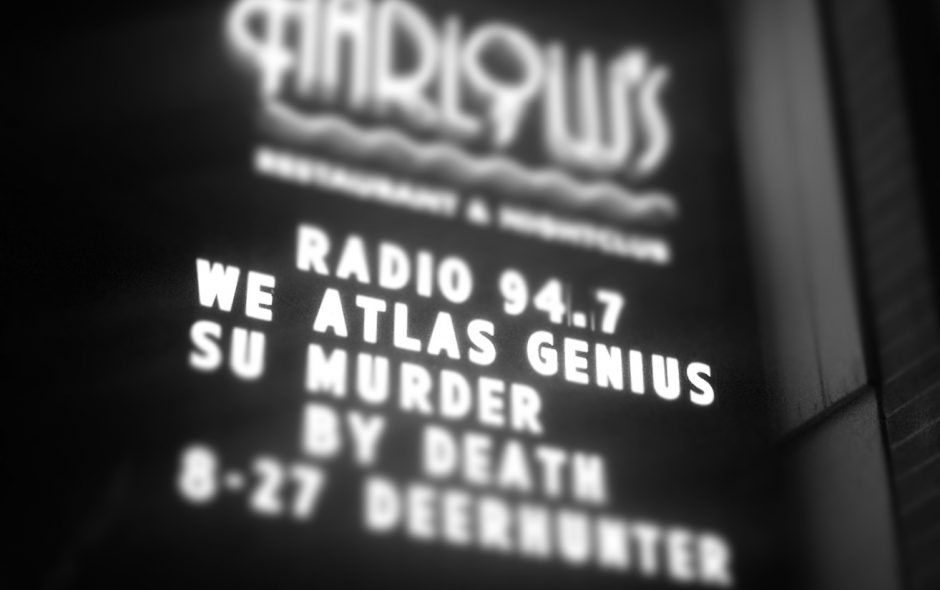 Last week my wife and I went to see one of my favorite bands, Atlas Genius, in Sacramento.

Comprised of two brothers, Keith and Michael Jeffery, from Adelaide, Australia, Atlas Genius has quite an interesting story.

I think it’s actually one of those stories where hearing the ending first makes the beginning all the more poignant.

So let me start with the ending — the “now” part.

If you haven’t heard of Atlas Genius or their music, without a doubt you will be shortly. They seem to have burst onto the music scene out of nowhere. I feel like I hear their hit single, Trojans, every time I turn on the radio here in San Francisco. Their album, When It Was Now, the one that’s garnering overwhelming praise, the one that’s propelled them onto the global stage seemingly overnight, is actually their first album they’ve ever recorded. Even more remarkable, their hit single, Trojans, was the first song they ever recorded together. Given so many “firsts” makes it impossible to not label them anything but an overnight success.

And that’s what we’ve done.

But there’s one problem with labeling them an overnight success: It’s not true.

It’s so easy to get caught up in the success of the now that we completely forget all it took to get there.

It’s so easy to forget the beginning.

So let me share the story of how Atlas Genius actually came to be where they are now.

Let me tell you about the beginning.

The first thing you should know is there’s actually three Jeffery brothers. Keith happened to play guitar and sing, Michael the drums, and Steven the bass. They grew up in a musical home where their parents encouraged them to start a band.

I think it’s worth pausing here to note how incredibly rare that is in today’s society, two parents who actually wanted their kids to start a band. It seems so out of place in this age where all anyone seems to care about is going to college so that we can be granted the opportunity to occupy some corporation’s cubicle. Yet here are Mr. and Mrs. Jeffery encouraging their kids in the directions of their passions. And more notably in the direction common convention tells us never to venture.

And so the brothers answered that call.

But starting a band isn’t a trivial task. Because writing songs isn’t where it ends. You have to record them, perform them, and share them.

With no catalog of their own original music to play, and no money to rent out a studio to record the songs they didn’t even have, the brothers set out to build their own studio.

It took them two years to build that studio.

And with no songs of their own to play and no money to build that studio, the three brothers earned money by working as a cover band. For two years. And piece by piece, gig by gig, night by night, they managed to scrape together every dollar for every piece of equipment the studio required.

And after a lifetime of playing music and two years of building their studio and playing other people’s songs, those brothers recorded their very first song together. Which just so happened to be a song called Trojans.

I always find it interesting how the last thing we do — the thing at the end of a long, long road of things we did to get where we are, the one that tips the scale and brings us some sort of success — gets labeled by the rest of the world as the first thing we’ve ever done.

Funny how that works.

They posted Trojans on the internet in May 2011. And I guess it’s fair to say, the rest is history. The song was an instant hit and by 2012 they were traveling to the US to select between several major recording labels. And here we are in 2013 and they’re currently headlining their first US tour.

There’s a line in my favorite Atlas Genius song, Through The Glass, that says:

“This map won’t get you home if you don’t know where you are.”

I don’t know what inspired the words, but I can’t help but think it takes a strong sense of desire, of connection with one’s passion and calling and self, to have the faith to spend two years building a recording studio, with funds earned by playing songs you didn’t write, before ever recording or performing one of your own.

It leaves me searching for answers to a question I so often forget to ask myself:

It’s so easy to throw out destinations and goals and desires without a second thought of where it is I am in the first place.

Just like everyone else, I care more about the ending than the beginning.

But the truth, the thing we must never let ourselves forget, is this:

It’s the beginnings that make the endings.